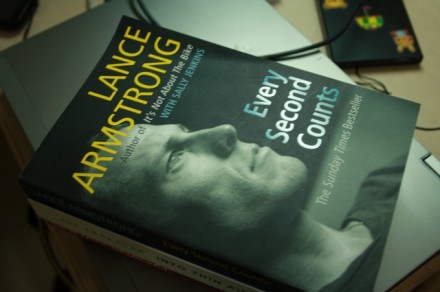 My two cents: As good as It’s not about the bike.

I learned Lance wrote a second book while reading the first which happen to be just as good. Today I am giving away “Every Second Counts” to anyone willing to come and pickup the book. I’ve got just a copy so the early bird gets the worm.
—————————————-Taken by Abhishek—————————————-
Where to pickup:
My House in HSR, near NIFT
Landmark: Axis bank, Opposite CPWD building
Before 1000 | After 2130

Interested? Please leave a comment – where and when. Please reply only if you will honor your commitment.

In his books, there are numerous accounts of drug testing. He even described himself as the most tested athlete in the world. Once again Lance Armstrong is in the news for doping charges by USADA. There are very mixed feelings about this on the Internet.

I have never doped, and, unlike many of my accusers, I have competed as an endurance athlete for 25 years with no spike in performance, passed more than 500 drug tests and never failed one.

7 thoughts on “Every Second Counts”