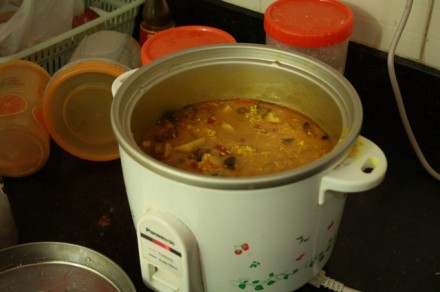 The state of the dish after 24 hours of cooking.

I have been cooking with just a rice cooker for weeks. It no longer make sense to refill the gas cylinder. I am vacating my awesome house next week.

So came thursday night, as I have often done, I set out to cook a nice vegetable biryani with the rice cooker. All set – the lever in cooking mode. But boy, even after a few dozen minutes it wasn’t steaming hot. Just little hot as “Keep warm mode” would do.

I sensed something wrong. But I got inspired by Birbal and the poor man. If a man got warmth from a light in the distance and if Birbal attempted to cook by hanging the pot high above the fire, I too could cook with this luke warm heat.

However, even after two nights and a whole day, the biryani isn’t cooked! Damn you Birbal. Damn you.

PS: I agree Birbal was just trying to make a point 🙂