Lengpui Airport is the only airport we have in Mizoram. It’ about two hours(?) drive from the state capital Aizawl. We do have another aerodrome – Tuirial Airfield decommissioned since the opening of Lengpui Airport.

According to Wikipedia, it is one among the three airports in India with a table top runway. I was seven standard when the construction started. They chopped hills and filled the valleys with soil – in layman speak. 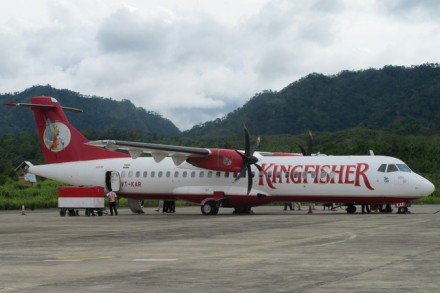 Kingfisher ATR 72-500 parked at Lengpui Airport. Before Kingfisher acquired Air Deccan, it was the second airline to fly to Mizoram.

Air India Airbus A319 taxiing to runway for takeoff.

I believe this is an ATR 72-100/200 series aircraft belonging to Alliance Air, a subsidiary of Air India.

Jet Airways’ ATR aircraft in the parking bay. Behind is the ATC tower. Jet was long rumored to fly to Mizoram. It didn’t happen until a few years ago.

Saw this Indian Air Force (IAF) plane at Lengpui Airport last year in June. A high ranking IAF officer was visiting Mizoram to discuss with the Chief Minister the IAF’s plan to install radar in Mizoram. I read in the news later.

A close-up view of the IAF plane.

I could be wrong with the facts and figures. I will be happy to stand corrected. Please do cite the source if any. Yes I like aircrafts and airports -especially those high in the hills.

2 thoughts on “Runway in the hills, Lengpui Airport”