Reiek Tlang is a popular  day trek from Aizawl. It’s a 30km, 2 hour drive to the west of Aizawl. This time, like most people I ignored it for  long because I can go there anytime. Why the hurry? But that time never came.

In May 2014, I was in between jobs and had a month break at Aizawl. I decided  it was time to strike Reiek off my list.

I have seen pictures of the cliff and the narrow path on the edge leading to the peak. I though was that was it.  What I didn’t know was that the short 3km trek to the peak through the thick and well preserved forest would be so amazing, if it were nearby  Bangalore, it will attract loads of trekkers!

It’s the best 3km trek I have done. Let me take you there.

Half way to  Reiek, you will reach Tlawng river. There is a small tea stall where you can have tea and snacks.The tea stall with its wide windows make it a nice place to sit and sip tea as you admire the river below. 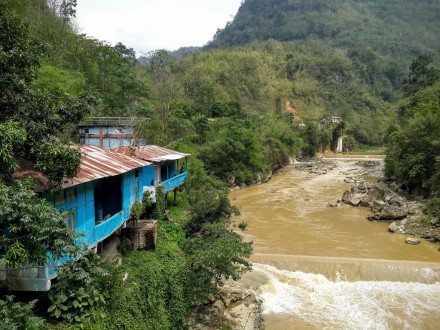 Water is pumped from here to Aizawl under  Great Aizawl Water Supply Scheme run by the State’s PHE Department. As it was the middle of monsoon, you can see the water is yellow and brown. My guess is they don’t pump water until it becomes clearer.

This crossing is locally called Reiek Kai and has many beautiful spots nearby which are popular in Mizo music videos.  A signpost says the bridge was built in 1993. I wonder what was there before? An old bridge or no bridge?

I learned from Pu Duhsaka,  that there was a small  jeep only bridge. 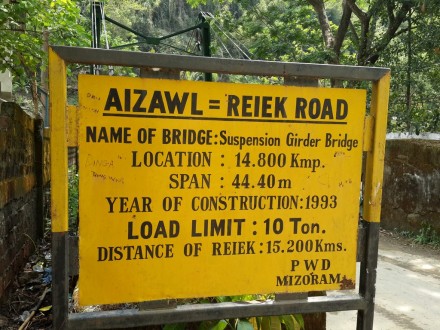 From here the road is steep and full of pot holes that time. If it has not been repaired, it would be in a very bad shape now. I had to drive in 1st and 2nd gear most of the time. But the drive was scenic and I am not complaining.

The next stop was at Vaipuanpho. I am very familiar with the name  as it is one of the camps of Mizoram YHAI National Trekking. The path of the camp  comes before the falls.

An adventure camp was recently conducted here by Mizoram Sports Dept. I saw the video on YouTube [Here and here]. I am  impressed by the training especially the solo night, where each trainee had to build a shelter and survive the night alone. 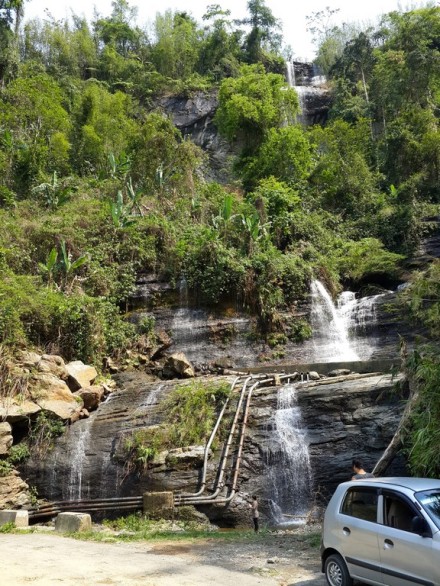 A few  months later, a PHE staffer who was cleaning the tank  got his hands sucked by one of the pipes and died.

A long the way,  we saw a couple of resorts had come up. No the resorts where you stay overnight, though that may be possible in some of them. They are more of a reserved and paid picnic spots with facilities for cooking, swimming and lounge. Picnic spot- That was what they were called when there were just a bunch of them.

On reaching Reiek, after asking the locals for direction, we drove directly to the Tourist Lodge complex. The complex has an open air stage and gallery where events such as Anthuriam fests are held 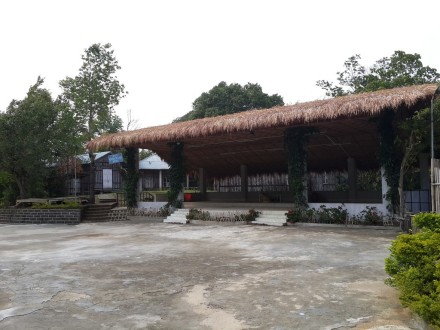 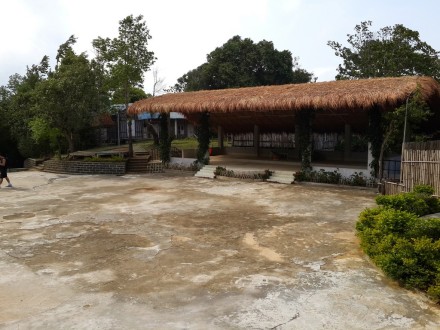 Next to the arena is  a model of a typical Mizo village and of course a tourist lodge for those who want to stay overnight. All of these surrounded by lots of trees and greenery.

As typical of any tourist attraction in Mizoram, there were hardly anyone. We had the place to ourselves that day. 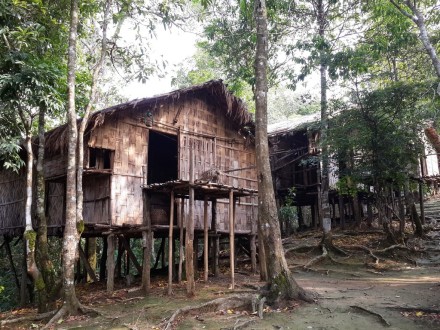 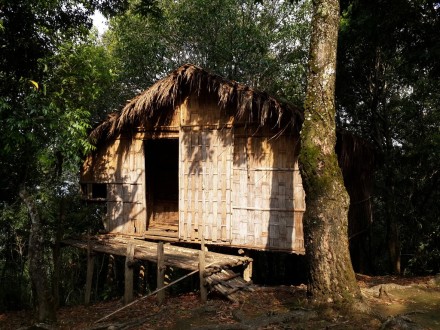 There are designated houses for the King,  his ministers etc. But I won’t get into the detail. This one below is Zawlbuk, dormitory for boys and young men. They gather here by nightfall so that they can respond swiftly should there be an attack. In the olden days, villages often attack each other. That is not the only purpose but like I said, I won’t get started on this topic. 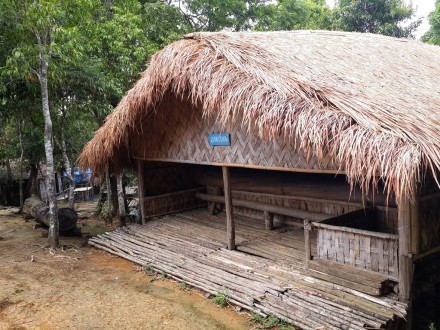 This is a also a children’s play area. 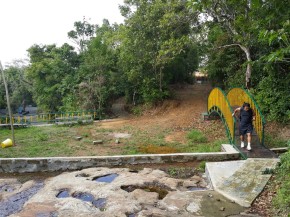 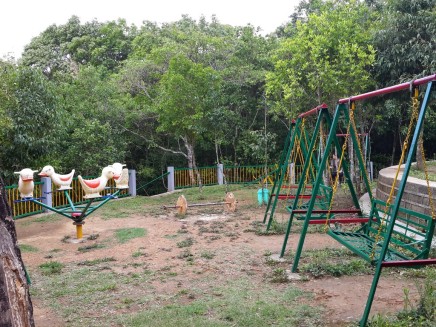 After this brief exploration we started to trek. We were immediately surrounded by thick forest. 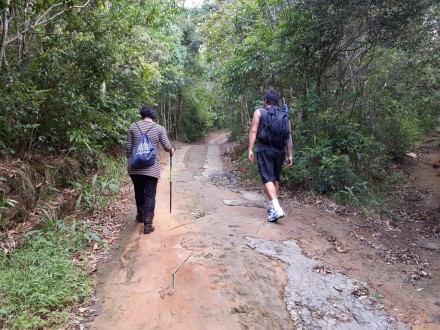 There is a parallel concrete band till the prayer sanctuary.

After this, it is earthen road  and closer to the peak rough rocky patches. 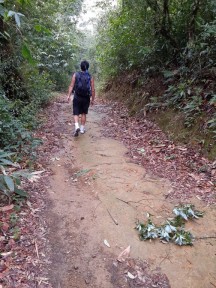 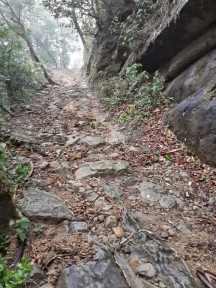 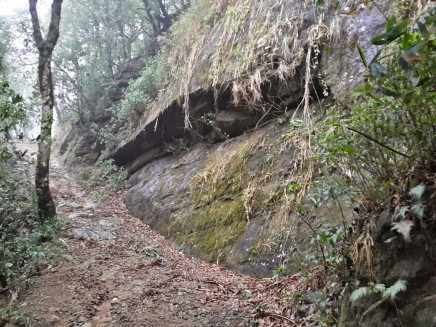 On the way, there’s a wide opening cave where a few  jeeps can drive into. 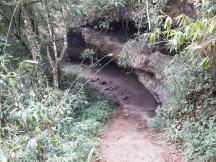 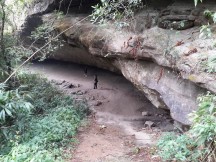 On the way up, we didn’t take the jeep road all the way. About half way, we climbed the steps on the ridge. This path is what I have seen many times on Facebook. 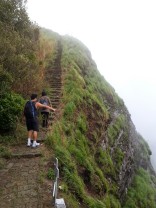 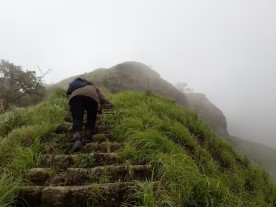 It was really windy. This much windy 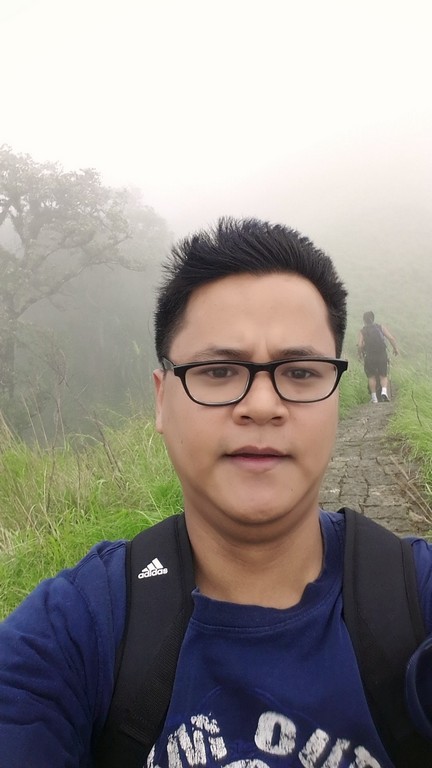 It was clear we were not going to see the Reiek and the view  people see. But  many won’t see what we saw that day either! 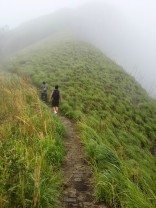 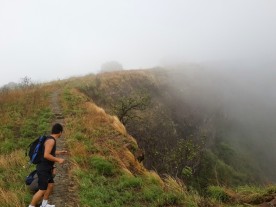 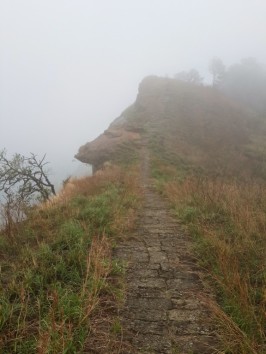 After a enjoy the peak, mostly just relaxing, we descended into the slippery slopes and down the jeep track this time. 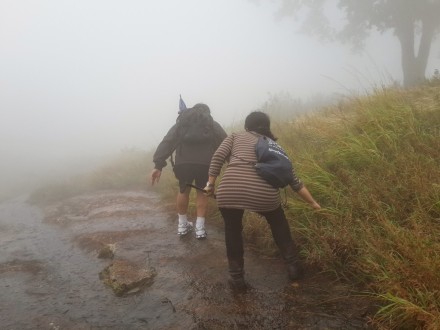 When we went returned to the parking lot, our car was the only one parked. When we arrived, there was a taxi. 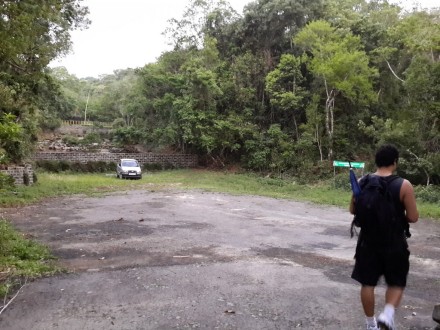 That was Reiek trek for me. I will definitely come back. I found  Reiek village to be very neat and clean. They have done a good job of conserving the forest around Reiek hill. May they keep up the good work.

Last year, a motorcycle club organised a ride to Reiek through the jeep track in the midst of monsoon. Only a few were able to reach the top. The event was covered  by the famous Mizo TV reporter Pu Vana.