This was a drive through Coorg, Wayanad and Bandipur.  Starting from HBR layout, we picked up our friends on the way, after several attempts  to wake them up by the way,   and headed towards Mysore.  Breakfast was at Kamat, which was not quite Kamat by taste. We took Mysore ring road and proceeded towards Hunsur.

We visited Nisargadhama and had lunch there after a quick exploration. The lunch was even worst than the breakfast. We purchased some tea and wine at the stalls there. Then we went to see the Golden Temple at Bylakuppe Tibetan Settlement near Kushalnagar.

At Madikeri, we checked into Ganesh Estate Homestay around 5 pm. This was booked through Stayzilla, a startup from Chennai. We spent the rest of the evening by exploring the premises and shooting the airgun. Dinner was at the homestay, some Coorgi style pork fry and chicken. Not upto our expectation but better than lunch and breakfast  .

Our room is in the main building, with attached bath and private balcony. For the money not bad! There are cottages too at a short distance from the main building. The four cottages were fully booked and occupied by a group of bikers from Bangalore.

There were commotions after commotions in the evening. From what we could make out, as it was a dry day in Madikeri, they were trying to find a way to get booze. They rode out in two or three bikes in turn. Around 9 at night, there was a big sound of applause. They bikers got their Booze! They had a bonfire and music going on till midnight. Power went off and the home stay turned on their generator which was so loud. Our friend even had to miss his much awaited EPL football match.

The next morning after breakfast, we went to Abbey Falls. My mates  were not impressed as we had such numerous  falls in Mizoram. We returned to town and went to Raja’s seat which we skipped the previous day as there was too many crowd. We took some pictures and we moved on.

We took Virajpet road and the  destination of the day was Sultan Bathery. We stopped for tea at Virajpet at a small tea stall. It rained while we were having tea.  Somewhere after Virajpet, we stopped at a hilly grassland in a village. The first time when I came here cycling, there were some crowd but just us this time. We walked up to the top and clicked some pictures.

At Ponnampet, the road forked into two. Both goes to Kutta which is the gateway to Wayanad in this route. In my previous trip, I took the left. Since we were visiting Irupu falls, we took the right. My friends were even less impressed by Irupu falls. Atei even decided it wasn’t worth walking up all the way and waited for us at some distance from the falls.

By now we were all worn out and hungry and I counted on the small hotel right after the check post at Tholpetty for lunch. That old man there serves beef, Kerala style. Beef!  But when we reached the joint, we were a little too late, lunch had got over. We had to  wait till Kattikulam to fill our stomach. Beef curry, dry fried beef and on more beef I think. The best meal in this trip! It was worth the wait.

Further on the way to Sultan Bathery, following Google maps navigation, I managed to take the same narrow uphill road that I took on my cycling trip. I laughed to myself, the others will not understand.  As we drive further into Wayanad, the girls keep comparing the houses in Coorg and Wayanad. The beautiful houses in Wayanad totally won their hearts. Towards evening, it rained again. Before dusk, we checked into KTDC Hotel Pepper Grove at Sulthan Bathery, also booked through Stayzilla.

After checking in, we went out to explore the town. We found an Arabic style fast food and packed some Chicken Kabab which was really good. The food at the hotel was disappointing though. The feel at the hotel was very different from that of the homestay in Coorg. There, we were in the middle of a Coffee Estate  and like guests in somebody’s house. Here, the rooms reminded us it was a hotel in every way.

On the last day, there was little left to do except to drive home. The preferred route would have been drive straight to Gundlupet. But me, as I always do, wanted to take the roundabout way so my mates could see the beautiful road through the tea gardens on Meppadi to Gudalur road. Though the drive was scenic and beautiful, I think it didn’t make a lot of impression to my mates.

At Gudalur, we found a neat place to eat, with lots of parking space.

By taking the roundabout way, what I totally forgot to take into account was the extra distance we had to travel on the last day. In my attempt to avoid Mysore, we took Chamarajnagar-Kanakapura road. The drive was very nice but it was a mistake too. Google Maps warned us several times about an under-construction bridge on NH 209. We ignored it and Google Maps was right! We had to turn back to Kollegal costing us even more extra kilometers. Around 9, we had a desperate if not now we may not find one on the way dinner at a hotel in Kanakapura, which was hopeless. It was the only place open. But right after passing the town, we saw more hotels which looked nicer. Damn! A couple of months later on return from a trip to Mysore with church members, we would be making the same mistake. 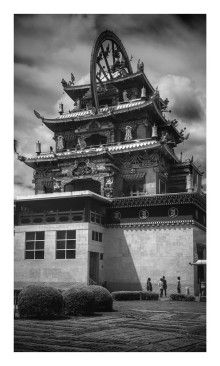 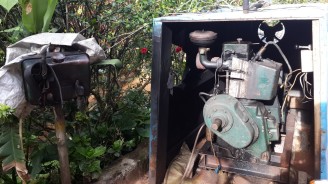 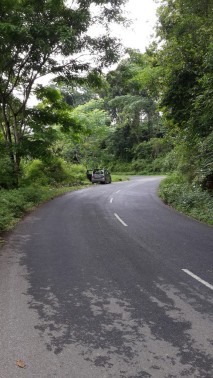 Virajpet,Coorg. Heaven poured while we were drinking tea.

A foot bridge on the way of Irupu Falls

Raja’s seat, Madikeri . Too many Zoom Car these days.